We, as a nation, have a very weak memory as well as common sense . . . In the current scenario, everyone is just trying to yell at one party, and infact one person, shahbaz sharif, for the issue between doctors and government.

Fair enough, let me make it clear, i am not at all fan or in favor of pml or any of its personals. Infact, this post is meant to highlight all other people and parties involved in it which aren’t being discussed in the media. 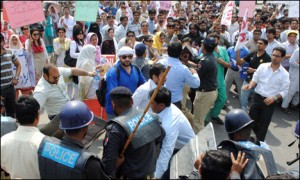 We’re saying that punjab government is spreading fake news and lies against people on media. Now tell me, is the media of Pakistan under pml ? punjab government ? NO! why can’t the PPP, federal government give out the “real” and correct news ?

Why isn’t the chief justice taking the sou moto action now ? what is he waiting for ? death of few more people ?

Where is the tsunami khan, imran khan now ? where are his lachay daar speeches now that we’re in favor or against, whatever, to this situation ?

No sir, it’s not only punjab government which is responsible for all this. It’s just part of a big game.

In the recent past, we’ve clearly learned and realized that no political party works alone and infact are one at the core. They work in coordination and for one reason, money.

It’s all a big politically engineered game, in which not only common people but also the doctors are being used themselves.

It started as the fight for rights, but now is just a political blame game. I wish things settle down in proper way.