Have you ever heard “shift to left” in diagnostic criteria of some disease (e.g appendicits – mantrels scoring system). Let’s discuss what’s exactly meant by this term, shift to left.

What is meant by left shift neutrophils 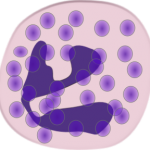 First of all we need to have a brief background. Less mature neutrophils are called bands or stabs (due to their appearance).

In acute bacterial infection, there will be increase in total number of mature neutrophils along with less mature bands or stabs in response to the infection.