Sinus infection means infection of the layer lining the sinuses in skull. The tissue covering these sinuses, when get infected by a virus, bacteria or a fungi, can result in sinus infection.

The term sinusitis means inflammation of the sinus cavity lining tissue. However the term is used in conjunction with sinus infection (debatable) of paranasal sinuses.

What is a sinus 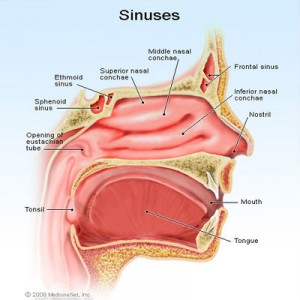 A sinus means a hollow cavity in our skull. There are four of them and their lining tissue secreted fluid constantly. However this secreted fluid is in acceptable amounts and is removed from the sinuses constantly too.

They have many functions in the skull including keeping it lighter, shape and for resonance of sound.

What is a sinus infection

In case of any blockage, the fluid might accumulate in them. This may get it filled with fluid and harmful germs like bacteria, viruses and fungi.

Common causes of sinus infection include anything which might block the sinus cavities opening, such as:

There are three types of sinusitis:

Symptoms of sinusitis include:

Toothache and fever means that infection needs to be managed seriously now. However, the sinus infection should be treated seriously in its initial stage too, as the blockage in sinuses can lead to increase in infection very easily.

Although similar to acute variety, the chronic sinusitis has more severe symptoms, such as:

Infection has to be treated to stop the progress of the symptoms of chronic sinusitis.

The doctor will have a detailed history and physical examination to come to the diagnosis. Investigations to confirm sinusitis might be performed too such as X-ray, nasal endoscopy, CT-scan, blood tests, etc. in some cases.

Treatment of sinusitis include is

For treatment of sinusitis if it’s acute, the physician may suggest decongestants and steam inhalations. However don’t use them or at least don’t over use them without the prescription of the qualified physician. The doctor might prescribe antibiotics too if the infection needs them. Most of the issues can be solved by merely simple medication or remedies too though.

For the treatment of sinus infection once it has got chronic, then better care is needed. Avoiding cold is one of the main aims to prevent aggravation of the condition. Warm moist air or vaporizer steam from pan of boiling water may help. Make sure that the water is taken off from the heat source.